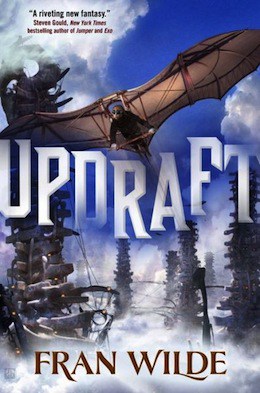 I bought this book because it’s shortlisted for the Nebula award, and I thought it looked intriguing. My copy is a US hardback edition, so I don’t know if it’s available in any other printed form in the UK (you can get a Kindle version). It’s listed as ‘Fantasy’ but I could easily make a case for it being science fiction – set in a world with a very different ecosystem, to be sure. There’s nothing here that requires the presence of the supernatural. People fly, but their wings are man-made and without them, gravity kicks in and they fall.

This novel is written using the iceberg method – so much so that you think you might be picking up the second or third in a series, but you’re not. The author merely knows a lot more than she’s telling you, and you have to do the usual (science fiction) detective work to understand what is happening. Of course, it helps that this is a society with social strata and secrets, which our heroine and reader proxy Kirit Densira seeks to learn and to expose.

Daughter of a successful trader, Kirit wants to pass her wingtest and join her mother in the family business. But she makes a mistake, breaks Tower Law, and finds herself fighting for both her wings and her identity, as she is pulled into the secretive and deadly world of the Singers, the priest-like enforcers of the Laws.

In this world, people live in organic towers which soar above the clouds and keep growing, gradually filling the lower levels with thickened bones. The higher you are in a tower, the higher your status; but if you can’t fly, you’re nowhere. And even if you can fly, you have to watch out for dangerous predators and keep your wits about you.

Updraft features the kind of imaginative world-building that you’d expect from the very best of the fantasy genre, but unlike a lot of fantasy (I’m looking at you, A Song of Ice and Fire), this is also incredibly pacy, with a story that fair rockets along, leaving you breathless in its wake. If you enjoyed last year’s success, The Goblin Empero, you will certainly love this as much as I did. And even if The Goblin Emperor was too fantasy-like for you, Updraft, as I said above, feels a lot like a certain type of science fiction (Katherine Kerr’s Snare is a good comparison), so should appeal to those wary of the usual fantasy fare. There are no dragons or elves herein.

Entertaining and intriguing as this was, I do hope there are more to come.