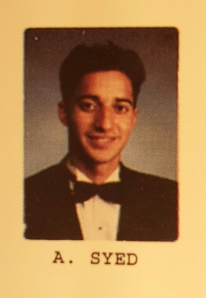 I don’t want to labour a point I already made on Twitter, but I started listening to Serial before you did (just deal with it). I heard the first episode when it was on This American Life, and it was not the first episode of that long-running show that had me gripped from beginning to end. I remember standing in the kitchen, in the middle of cooking, paused in mid-move so as not to make a sound, lest I drown out the distorted telephone voice.

My first exposure to podcasts was via The Word magazine, and I occasionally enjoyed listening to several middle-aged blokes sitting around talking about music obsessively. I am a middle-aged bloke myself, an accident of birth, so I was very much the target demographic. Never in a million years did I think that one day I would abandon live radio altogether in favour of a subscription list of (at last count) 45 podcasts.

I listen to a lot of tech, and a lot of ‘true stories’ podcasts, but also things like Philosophy Bites, Life of the Law, 99% Invisible, and so on. I am still loyal to the Radio 4 podcasts I have always listened to, but they’re not longer at the top of my things to love.

Serial has generated a lot of column inches over the past couple of weeks as slow-moving old media finally caught up with it. It was even on Radio 4’s Media Show. Yes, I am sneering at them. Has Serial’s adoption by mainstream media spoiled the pleasure a little bit? I think it has. It’s a bit like when you love a band and expend a lot of time trying to tell people about them, only to have your dreams come true, and, oh, now everyone is talking about them and you don’t feel special any more. I know I’ll feel a wrench if I ever see a Larkin Poe feature in the Graun.

As someone with impaired hearing (I can’t hear the full frequency range), I struggle sometimes to hear what people are saying on Serial. The first podcasts I listened to were just people (blokes, usually) sitting around a microphone, but the more sophisticated podcasts are proper radio soundscapes with music, sound effects, and clever editing of contributors. I think they’re brilliant, but background music and layered voices can be hard. Some of the recordings are of sub-optimal quality. In the case of Serial you are of course dealing with 15-year-old courtroom testimony, police interview tapes, and all those phone calls with Adnan Syed. Some of it is hard to make out, but it is all compelling, and it underscores the sense that this podcast is a serious piece of investigative journalism, with an evidence base. Hunting around online, you can find scans and photos of documents, letters, maps, tables, and so on.

What makes Serial different from other examples of investigative journalism? After all, the idea of a journalist using some media platform to expose a miscarriage of justice is not new. But when TV or radio has done it in the past, they usually condense the years-long research and legwork into an easy-to-digest hour or 45 minutes for broadcast. But the thing with a podcast, and the thing I started to get as soon as I started listening to The Word, is that your audience can be so niche that there can be no such thing as too much information. It was listening to middle-aged blokes sitting around talking about The Beatles that gave me this insight. How much is too much to an obsessive? No such thing.

So Serial is investigative journalism and narrative for obsessives. Once the first episode has you hooked, you just want more and more, never ending. And while mainstream media has occasionally made noises about how disappointing and Lost-like it will be if there’s no real conclusion, I don’t think that really matters. The thing about serial narratives is that you have to find ways to keep it going.

In reality, you don’t have to dig very deep to find potential spoilers. As we keep being reminded, this is a real case with real people, and you don’t get 5 million downloads without somebody paying attention.

You’ll be wanting to know what I think (Chorus: Nobody cares what you think!)

From the very first episode, I knew that there had not been a convincing case made, that there was reasonable doubt. By the time you heard recordings of two of the jurors, you realised that, somehow or other, they’d been bamboozled and confused into convicting in a ridiculously short time. One of them said that she believed Jay because “he was going to jail anyway, so why would he lie?” When in fact the whole point was that Jay’s sweet deal meant he wasn’t going to jail. That, there, should be enough to invalidate the verdict: the jury were not in possession of all the facts. Not because they hadn’t been told, but maybe because they were a bit thick. Then there was the juror who judged Adnan guilty for not defending himself after being specifically instructed not to take that into account. As for all those who claim that you can’t help making such a judgement and putting this down to legal niceties, I disagree. If you think about it at all, if Adnan was innocent (which he has already said by entering a plea), it was up to the State to prove him guilty. So, no, you don’t judge somebody for not trying to ‘prove’ their innocence. The point is that there’s supposed to be a presumption of innocence. That recording of that juror showed that for at least one of the jury – and probably more than one – there was no presumption of innocence. Again, I have to ask myself if they were a bit thick.

As we all know, the case always rested on shaky ground, viz:

Mostly, however, I think the case rests on prejudice against Adnan because he was an American boy with a Pakistani background. A lot of the police narrative of the case rests on the (implied) idea that this was some kind of ‘honour’ killing, by a stereotypically angry Muslim. All of the stories about him being dragged out of dances, about the secrecy surrounding his relationship with Hae – all of that implies that this was somehow unusual. As his cousin has pointed out on her blog, this is actually just typical for just about any Asian-American teenager.

I’m not Asian, of course, but this also rang true to me. When I was in my early 20s, I dated a girl whose over-protective father would not let her go out with boys. I used to park and wait at the end of her road. She would leave home to ‘go round a (girl) friend’s house’, and jump in my car. We would go out, and I would drop her at the end of the road and watch her walk home. We did this for several months, before she finally plucked up the courage to tell her old man. Who used to let his yappy little dog loose whenever I came to the door after that.

So I’m fairly clear that there has been a miscarriage of justice, that there was tons of reasonable doubt. But I’m also more sold on podcasts than ever before. And the best app, for my (actual) money is Overcast.