Flickr was one of the earliest social networks, starting in February 2004, and, among other things, pioneered the use of the hashtag, which later became a key part of the Twitter experience. It was a place where you could upload photos/descriptions, connect with other users, join groups, make comments, and create themed collections of your own photos.

I joined in July 2004, and it really felt like a small and friendly community in those days. Of course, it was hard to see how they would ever make money.

They were acquired by Yahoo in 2005, and the long downhill descent began. There are three things that Yahoo did that are variously upsetting and annoying.

The first was that they neglected it, allowing its performance to get worse, and were particularly slow to respond to the smartphone revolution. Even as the iPhone became the most ubiquitous camera used by Flickr photographers, the Flickr app experience was kludgy. As Instagram demonstrated how simple a photo sharing social network could be, Flickr’s was complicated and slow. Even today, if someone shares a photo from Flickr to Twitter, it loads extremely slowly, making for a poor user experience.

The second thing was that they tried to drive Flickr users towards Yahoo as a web portal at a time when the very idea of a web portal was becoming ridiculous. But Yahoo are an advertising company, and that’s what they wanted to do. So they loaded an ugly, clashing Yahoo menu bar at the top of the Flickr site, and they forced everyone to use a Yahoo log-in rather than their old Flickr log-in.

Which is when the problems began for me.

The third thing was that Yahoo did what all these tech companies do: they tried to avoid their user support responsibilities by pushing people towards forums, where the same questions get posted over and over again, with similar answers, and nobody ever gets helped, and the secret portal into actual technical support is hard to find and opaque. All of which is the inevitable result of a free service that clearly doesn’t stand a chance of making money through advertising and which becomes a white elephant, or a millstone hanging around the neck of a slowly dying corporation.

Yahoo is acquired by Verizon, Flickr slips further down the list of priorities, and more and more people find themselves in the same situation as me: unable to resolve the log-in, or successfully recover lost passwords. In 2013, Yahoo was hacked, and 3 billion user accounts were compromised.

Around the same time, my Flickr log-in and password corrupted in some bizarre way and went from being a recognisable email/password to being long strings of random characters.

That’s not my own corrupted log-in, but mine was very similar, and so was the password. I mean, it’s not even an email address. In time, I was unable to get in at all, and after a fruitless run-in with Yahoo support, I ended up creating a new Flickr account so I could continue to upload pictures.

But it was never the same, and I was never happy, and I eventually stopped using the service. 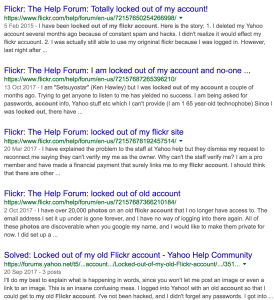 The screen grab left shows a sample of the many Flickr users who are having issues accessing their accounts.

My own problems were exacerbated by the way my Yahoo identities seemed to burgeon. When Yahoo acquired Flickr, I already had a hidden Yahoo identity, because my then-internet provider, BT, used Yahoo as the backbone for its “brinternet.com” email service. But somehow, I ended up with yahoo.com and yahoo.co.uk identities. Over time, and attempts to log into Flickr, these have expanded, and I now appear to have four distinct ways of logging into Yahoo. Four!

But here’s the thing. Every single one of them connects to the new/replacement Flickr account, and none of them will connect to my 2004 vintage Flickr account. So I have four Yahoo log-ins, and no way to get into my old Flickr. In my mind, at least one of the log-ins should resolve to the old 2004 account, but no longer does. So it’s an orphaned account, is what it is. There’s a case here for keeping hold of all of your old computers, phones, and other devices, because account details might be cached/stored. O for the iMac that used to be in the garage.

And it has been five years.

I’ve tried on a couple of occasions to get help from Yahoo. When I saw the news that Flickr is being sold to Smugmug, I thought it was time to try again.

Yahoo’s response is basically robotic. You give them the details of your account(s) and you still get a response along the lines of “I cannot find the account with the details you have given. Please give…”

I got exactly the same automated response as last time. Replying to their emails rarely elicits a human response. They send through a link to “security questions”, which ask you things you could only know if you had access to the account. It’s enraging, and obscure:

My response to (1) is, I don’t know, I haven’t been able to see inside the account for five years.

My response to (2) is, I don’t even know what this question is asking.

My response to (3) is, I don’t know, I haven’t been able to see inside the account for five years.

We went through this three times.

Each time, I replied to their email saying I didn’t understand and couldn’t possibly answer their questions. Each time, I didn’t get a response until I filled in something on the security page. Each time, I was then told that my responses were inadequate.

In the end, they refused to give me access to my account—but they did offer to delete it on my behalf. Consider the warped logic of that: no, we can’t verify your identity, but yes, we will delete all these photos that might not belong to you, because why not.

Meanwhile, I still have four different Yahoo log-ins that all give access to the wrong Flickr account. Meanwhile, I continue to receive communications to my secondary email address which are aimed at my original identity.

The only solution appears to be for me to click through 3,600 photos and manually download them, then add them to the other account, and try to live with the knowledge that the kudos attached to being a 2004 early adopter of this pioneering service is no longer mine.