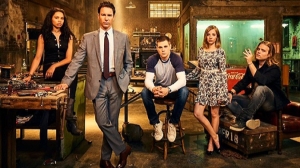 I really enjoyed this “mid-price Canadian science fiction” series when I watched its first season on Netflix. You start out with low expectations, thinking it’s going to be just another one of those high concept shows that starts out okay, goes downhill, and/or gets cancelled quite quickly. But it turned out to be much stronger than I thought.

The basic (low budget) premise is that the future is fucked, so that ‘travelers’ from there are being sent back (in teams of five) to try to fix things. They transfer their consciousnesses* into the bodies of people who are about to die, take over their lives, connect with the rest of their team, and carry out missions. So far so ordinary. Where this show shines is with its cast (including Eric McCormack and MacKenzie Porter), and its emotionally intelligent writing, which is not afraid to spend time on the consequences that ensue when a different personality takes over a body. An old man in the body of an athletic teenager, for example. Or a highly intelligent medic in the body of a mentally disabled woman.

Where a lesser show might simply want to focus on the mission-of-the-week and forget the messy personal stuff, this show knows that in the end, that’s where the best stories are going to be. Like breaking Protocol Four, for example, which is don’t change the future by making a baby using your new host body.

So to Season 2, which picks up the conflict with things going wrong, the future changing, and the team’s Historian becoming less and less able to predict the present. This season takes time to build up relationships between some of the travelers and their host families, leading to some powerful episodes that have a real emotional impact — and a huge payoff at the season’s end.

I binged it over a few days: so good.

Not to be confused with Netflix’s Mindhunter, this show is a dramatisation of another true FBI story involving profiling: the hunt for Ted Kaczynski, known as the Unabomber. Kaczynski carried out a decades long bombing campaign, targeting academics and others involved in modern technology, which he considered to be the root cause of all of society’s problems.

Kaczynski was caught thanks to what came to be known as forensic linguistics, which is to say, he had a very distinctive and somewhat archaic writing style, which his own brother recognised when the Unabomber’s manifesto was published in The Washington Post.

This is a fascinating TV dramatisation, which uses a multi-threaded narrative to take us through events before and after Kaczynski’s capture, and a number of flashbacks to the bomber’s childhood and the years leading up to his retreat from modern life. The show manages to find sympathy for the man, who was one of those child prodigies who never quite fulfilled his potential. In fact, I’d say he’s the poster child for the dangers of pushing kids out of their peer group. He skipped a grade in school (jumping from 6th to 8th), thus leaving behind his age mates and becoming a freak who ended up isolated and angry. There’s a fanciful scene in which he delivers a boobytrapped classroom note to someone who had hurt his feelings. Then he went to Harvard at 16, where he got pulled into a brutal programme of psychological experiments that led to him being personally abused and belittled on a weekly basis.

The upshot was a man who failed to fulfil his early promise, still got his PhD, but then gave up teaching after two years and went to live in the wilds of Montana in a mathematically perfect log cabin. His bombing campaign ensued.

Meanwhile, modern technology has brought us the 45th President of the United States.

Great series, well worth a watch.

*That’s a lot of esses